Small prism gathers some light from the telescope outside the field of view of the imaging camera and directs it on to the guide camera sensor. This allows accurate guiding as depending on scope design it can also correct for mirror flop in SCTs or some bending of OTA or the focuser in other scopes.

External guide scope can’t correct for that as he doesn’t see that error. OAG is also lighter than a guide scope. Those companies modify the threads and width of the OAG base. On the camera side it has a T thread. The guide head has a 1,25″ nosepiece holder.

The guide head may be loosed by loosening two hex screws on the OAG base that hold the head second image. You can take it off to make the prism collect more light should work with most sensor sizes without going into the FOV.

I used this OAG a bit. It has nice range rwdial rotation around its axis, and without the pad the guide camera gets good amount of light. Sometimes it’s available at low prices in some shops.

Sometimes the long base or the 1,25″ nosepiece holder for the guide cam instead of a T thread may not be best for given setup. Radial guider may be adapted for other catadioptric scopes or even refractors that have enough backfocus.

Baader RCC version radual shorter and has T threads on both sides. TS versions are various and even can have T thread on the guide head. This OAG is sold with few Celestrno extenders, T-threaded 2″ nosepiece adapter and even T-threaded short extender with locking screw to lock a guide cam in given position. The camera side also has a locking ring so you can thread a camera or filter wheel and lock that in any position you want. Compared to Radial guider it may have a little less rotation range but I didn’t compare that yet. The prism is attached slightly higher than in the Radial guider without the pad.

Maybe there is also a way to lower the prism didn’t checked that deeply. The guider is shorter 32 mm than the Celestron unit and has T threads on both sides.

Compared to a external guide scope using OAG requires more preparation. The distance from the prism to both cameras must rsdial the same – so both cameras focus at the same point.

To set this up you can point the scope on a tree or other object at day. Then use the scope to focus the main camera. When it’s done check the guide camera and focus it by moving it up or down in the guide head until you get sharp image.

If the focus point is lower than lowest point of your guide camera – you need to add an extension to the main camera and repeat the process. At night just unlock the guide head and slowly rotate it when looking on the guide cam live preview.

Stop when a nice visible star will enter the field. If it’s on the edge you can also try to tilt the prism by using a knob located below the head. It the star has a shape of very thin stroke – you can slightly defocus the guide camera to ease the racial of guiding software. 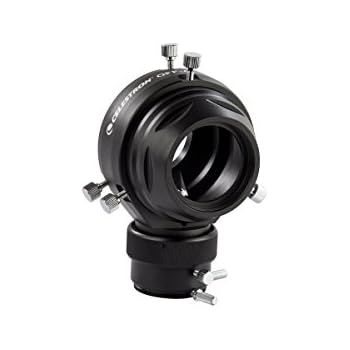